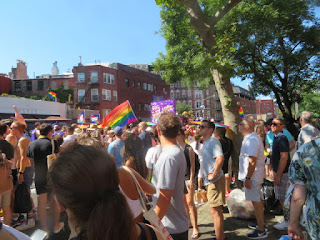 Tarek Ali looks at “White vs. Black Pride? Why Is the Gay Community Segregated?”

So he asks why there has to be a Black Pride and a Trans Pride, but no White Pride.  (There is a Straight Pride, which gets pretty silly.)

Most of what he says is familiar, but I have never, in modern times, run into clubs with dress codes or music intended to exclude black people.  (This used to be true back in the 1970s.)

He says that stating exclusions in dating preferences on sites is “wrong”.  I don’t use the sites.  I do have an issue if people aggressively approach me in clubs to get me to dance and I am not interested – because of the idea of “no spectators”.  But yet, in practice, my own tastes as to what I would want for an intimate partner is rather exclusive, but by now that is a moot point.

Posted by Bill Boushka at 7:03 AM No comments: 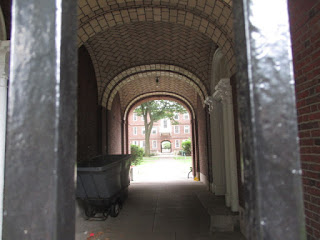 I am going to go out on a limb and put this on the LGBT blog, even though it really does apply to everyone.

More than 250 college deans have issued a letter emphasizing the idea that universities and students should emphasize self-care and family care in planning how to address the hardships caused by Covid19.  Here is the main link.

The letter seems to be related to Harvard’s “Making Caring Common Research” program, established in 2014, with a letter today “howthe pandemic is strengthening fathers relationships with their children”.

Obergefell (2015) would seem to make the program more applicable to some gay men, as more male-couple families adopt or sometimes seek surrogacy. But same-sex couples were often parents as far back as the 1990s rather frequently.

Yesterday, in a Zoom, a black gay man who also was a single father to a teen did discuss his concerns with the police and with teaching his son how do deal with police. 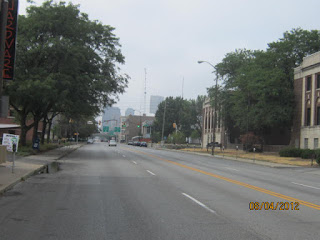 One other thing: Arrika Heron, in the Indianapolis Star, reports that the Indiana Archdiocese may bar transgender children from being referred to by other than their birth gender in their schools, link.

Posted by Bill Boushka at 7:44 AM No comments:

Around the US (and in the EU) gay bars on the brink of disappearing forever because of coronavirus lockdowns, although some are trying to come back now 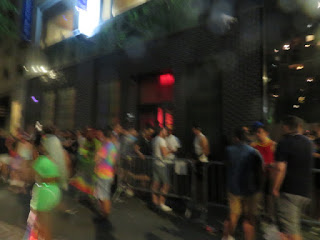 Although gay bars in the Washington DC area are making progress toward more reopening with some kind of social distancing (the Green Lantern was reported as reopened), other cities are retreating, as bars in Los Angeles County, Texas, and Florida had to close with the sudden geometric uptick in cases after Memorial Day play.

The problems appear to be young adults congregating indoors in air conditioned spaces without masks, not beach going or protests.

But around the country many gay bars are starting to go under for good.  Part of the problem is that they are less “necessary” than they once were (The Conversation).

Reuters has a detailed story from May and mentions the Therapy in Hells Kitchen, which was reportedly on the edge of never re-opening. . But the website is working    The FB page suggests a Sunday brunch.

The owners say they had never imagined that anything like this could happen so abruptly. Yet some people started to see what could happen in December (otherwise why would a teenager design the world’s biggest tracking website before knowledge of the virus was public).

The economics of social distancing in a bar space (or disco) probably don't work for long.

DC has lost Town, Cobalt, Eagle, and Ziegfeld, but gained Pitcher’s (which is trying to reopen carefully)

Posted by Bill Boushka at 6:48 PM No comments:

HRC building in DC shows its own take on BLM 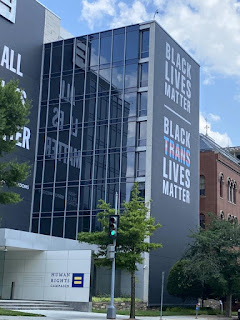 I drove by the HRC building Monday, and found signs “Black Trans Lives Matter” (think about FOSTA) and “All Lives Matter” on their building. The organization, like many nonprofits, has had layoffs and disruption by Covid. 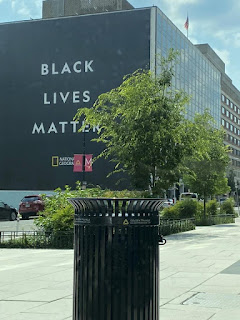 Two blocks down 17th St there is a Black Lives Matter sign over a construction site across the street from the National Geographic.

There are more people on the streets now, not just protesters, but familiar faces (like from Town and even libertarian events), some of them visiting sites (like where Pike’s statue was toppled near Judiciary Square).

I think some of the 17st St restaurants are opening up for outdoor dining now.

I haven’t taken Metro since March.  I want to get both the antigen test and antibody test before I do.  I think there’s a fair chance I already have the antibody (with very minimal symptoms around the end of March).  Maybe I’ll do the BGC vaccine.

The Red Cross, remember, didn’t want my blood this time – not because of being gay, but because (upon questioning) they think I was exposed.  So I am supposed to do the tests soon.

Just as a thought, I wonder if there is a risk that some people could carry the infection (minimal) in nose and throat without it clearing completely but with it never creating disease because their cellular immune systems (T4) somehow simply enclose it.  Other viruses work this way in some people.  For gay men, this virus is turning out to be ironic.  Gay men living alone may have the lowest risk of all.  And we still don’t know if Truvalda might be somewhat effective.

The Williams Institute at UCLA reports that 81000 DACA persons are LGBTQ.

Posted by Bill Boushka at 9:54 AM No comments:

"Objective" analysis of Bostock v. Clayton County and the SCOTUS "literal" reading that backs into (effectively) including gays and trans persons as protected classes 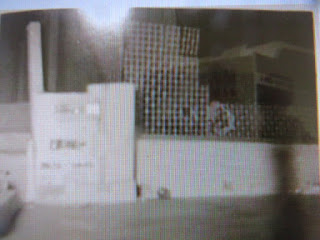 At the outset, the firing in 2013 that led to the case is disturbing in many ways.  Bostock had promoted voluntarism by working with a gay softball league.  I played in one in Dallas in 1984, and actually once in New York City on Leroy Street in 1978 (when we had a game late on Pride Sunday, and I actually got a single with the bases loaded and continued a rally.) 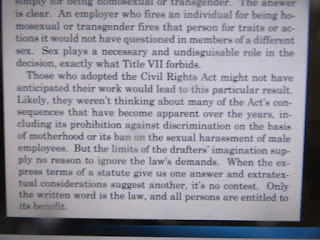 So now we have Alito and Thomas and “revisionary literalism”.

It’s true, if I can’t marry a man but a fictitious sister (I never had one but my parents actually considered adopting one when I was in fourth grade, around 1952, about when I started piano) does, that’s discrimination on the basis of sex.

But it’s also true that Congress in 1964 probably could not envision the social climate that would evolve starting in the 1990s (which also led to “don’t ask don’t tell” and then its repeal).  Remember the great March on Washington in April 1993?

Reason also has an edited copy of the opinion.

Early 1964 was a particularly troubling time in my own life, so I remember the whole social climate well.

Posted by Bill Boushka at 7:27 AM No comments:

Japanese homophobia is based on the idea that there is a duty to have children (report): I think this was part of my own experience (US); SCOTUS rules on workplace (breaking)

Daniel Villareal has a provocative story in LGBTQNation with a perspective I have been aware of for decades. It is, “How Japanese homophobia is distinctly different from American homophobia.  What od gay bars have to do with it?”

Recently, a Japanese prefecture passed an ordinance making it illegal to out an LGBTQ person.

The article maintains that American homophobia has been based on religion, “outdated” gender roles and sanctity, Japanese (and in general, Oriental) homophobia is based on the idea that one must have children to help care for one’s own parents.  The article reports that LGBTQ organizations in Japan don't like to work with gay bars.

Actually, it is more the idea that parents, as part of marital sexuality for life, need the reward of lineage.  This is important in many religious denominations.  It tends to be part of the culture of the far right, part of “blood and soil”.  It also seems to fit into Islamic culture.  The idea of control of a lineage becomes imprinted in the mind of someone dedicated to it and improves sexual performance in marriage.  Unfortunately, it implicitly makes demands of other people (your children) and confers the privilege of making such demands.

It is also important in this like of thinking to have a family to support, in order to not have an unfair economic advantage to being single.  This was an issue in the 1990s as people without families could work for less, sometimes keeping jobs in layoffs. Or they might be expected to do unpaid overtime for other associates' family leave (or religious obligations on the Sabbath).

As an only child, I do think this was part of my own William and Mary expulsion in 1961 that I have often written about.

Wikipedia picture of Mie Perfecture in Japan, click for attribution. 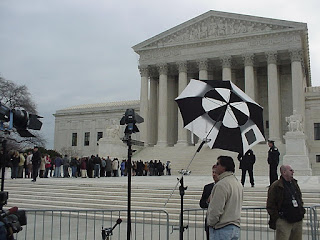 Breaking:  By 6-3, SCOTUS has ruled that federal anti-discrimination law protects gay and transgender (and fluid) individuals from most employment discrimination, link.  It is remarkable because conservatives (Gorsuch) joined in reading the law literally ("sex"). Gorsuch writes that  one cannot separate sex from sexuality or gender identity.  There will be more details in a post tomorrow.

Posted by Bill Boushka at 5:57 AM No comments: 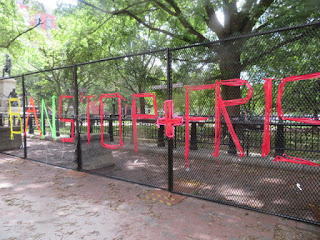 This should have been Pride Sunday.  Well, indirectly, through Black Lives Matter, it has, in many cities. In Brooklyn, there is a tremendous rally going on for Black Trans Lives Matter right now, as NBCNews reports.  I am waiting to see if News2Share or Zenger picks up some footage.

BBC news reports some very negative news from Poland, about a right-wing president Andredjez Duda compares LGBT people to communists, for the sloppy reason of solidarity with Black Lives Matter. Call is soft fascism.  Remember that Auschwitz is in southern Poland (I was there in 1999). There is another story about a rainbow image of the Virgin Mary offending the Catholic Church there.

Now many white gay cis male YouTubers (including west coast) have been making their usual coronavirus self-preservation exercise videos recently, whereas a month ago they all said they were working on getting their businesses and activities reopened. This year it is the “unheard” who are marching and being seen.

Posted by Bill Boushka at 5:16 PM No comments: