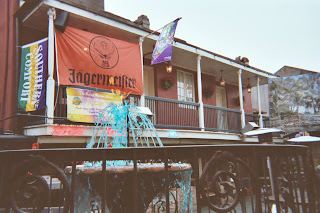 I know it's painful, and I chased a perfect storm in the previous blog entry. But let's walk through once again the way the typical "religious" socially conservative family person sees things. Again, some of what follows is supposition, not fact, and would fit what many foreign languages call "the subjunctive mood."

Reproduction and lineage is a natural part of being human. If a person grows up with good character and "realistic" social interactions with other people (without too much distraction demanded by external media culture) the person should become socialized into wanting a marital partner for life, abstaining from sex or even erotic thoughs until marriage, remaining faithful for life, and raising children who carry on the family as a collective experience. Anyone who doesn't get socialized to want this is too selfish, doesn't "like people," doesn't love God or Allah, etc. Therefore any such person is not fully human, and it is OK to expect those people to take a subordinate position in order to meet the needs of families first. Yup, that's how a lot of people think, still. Mandatory "socialization" is a necessary step to making someone a properly developed human.

What about the competitive world among families? (The soap operas give those a pretty good workout.) Once an adult has a family, the family still has to compete with other families in order that the standard of living raises for everybody. This is where most religions (especially the Vatican) try to come up with theories as to how to have a "kinder and gentler" form of capitalism and take care of the poor. Theories of virtue abound but it is hard to reconcile any of them with personal competitiveness or competitiveness among families. The prevailing concept to enforce this virtue is called "public morality."

Libertarianism comes along, buttressed by ideas like individual sovereignty and personal autonomy. The first moral principle is the harm principle, which is coupled with property rights and freedom to contract (and enforcement of contracts). Equality is achieved by apply the law in a consistent fashion. This is supposed to guarantee equality for lesbians and gays.

Admittedly, even in a libertarian society (or at least liberal society) we deal with how to protect the vulnerable or dependent, and how to carry out the principle of respect for life. One idea is that enlightened self-interest will lead to volunteerism and public service.

With all the debates about marriage and social resistance to same-sex marriage, one thing is clear: many traditional people want the legal institutions associated with marriage to mediate the extreme attitude of self-reliance and accept that emotional and practical complementarity as we usually find in traditional marriage is a good and necessary thing for most adults and especially to facilitate raising children and taking care of the elderly or really disabled. By logic, this puts people who do not legally at a disadvantage, and leaves the vulnerable to being forced to make more "sacrifices" to meet the needs of others. This can get more serious as all these "inconvenient truths" (global warming, pandemics, national security) keep on growing on us. However, no political system has even been successful in getting individuals to become "socialized" to meet "common good" without becoming corrupted in the process. That's one of the strongest arguments for libertarianism and the idea that "freedom works."
Posted by Bill Boushka at 4:54 PM