Will "don't ask don't tell" really be repealed -- finally? Not completely, but it can be changed 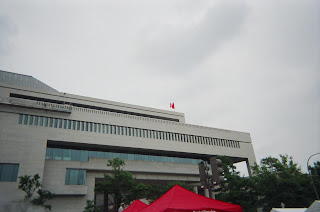 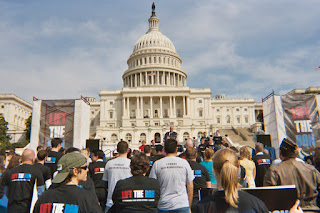 Today the NBC Today show interviewed Colin Powell, and asked him whether now is the time to repeal “don’t ask don’t tell”. This comes after the two 2008 presidential candidate debates last week. All eight Democratic candidates were willing to raise their hands to the idea that DADT should be repealed, and all eight Republican candidates said, essentially, leave it alone. Remember that John Shalikashvilli had recommended that we seriously reconsider the policy.

Powell said that the country has changed some more since 1993, and it was well to look at how the policy is being enforced. But he also added that we’re in the middle of a war (as did the Republicans) and that a change could be dangerous. “The military is different,” he insisted. “It is the one organization that applies state sanctioned violence.” Yet Powell here is indirectly conceding that it is legitimate to yield to the emotions and sometimes illogical prejudices of others in making public policy if the security concerns seem compelling enough (and we all know that now since 9/11).

It’s important to realize, that before the November (Defense Authorization) 1993 law officially codifying DADT into law was implemented, the official policy was to “ask” first. Anyone with homosexual tendencies was, as a matter of DOD policy, to be excluded upon accession. It seemed like an advance, however modest, when Bill Clinton took office to stop asking. On his July 19, 1993 speech at Ft. McNair in Washington DC, Clinton called the new policy “don’t ask, don’t tell, don’t pursue”. He even indicated that it would take an “open statement” to start discharge proceedings. The DOD regulations published in February 1994 seemed to give covert gay people some breathing space. Going to gay bars would not, in itself, violate the rules and should not trigger discharges.

Of course, we all know from history (with thousands of discharges) that these regulations, which were crafted cleverly to sound benign, have not been followed in good faith in many commands. There have been plenty of witch-hunts, and people have been sacked to satisfy the perceived emotional needs of commanders and their commands.

One major reason why “don’t tell” has become an inoperable idea is the Internet. The world, with globalization, has changed in a way that gives private lives public significance to others. Maybe this was always true (look at the way families viewed their “reputations” a couple generations ago), but the Internet has made individual people’s personal values (including sexual values) have much more significance to others with whom they can come in contact. This would be especially true in the military, as Powell points out.

Is the military that completely “different” as Sam Nunn, and then Charles Moskos and eventually Colin Powell would say? It is and it isn’t. The 1993 law (look at it online at the Stanford Law School library) says (in words like this) that there is “no such thing as a fundamental right to serve in the military” and that the special conditions in military life require strictures on conduct that would not be acceptable in civilian life. Yet many of these issues can occur in civilian areas like law enforcement, fire departments, the merchant marine, even some areas in teaching (where intimate attention to disabled kids can be necessary) and even medicine. To make the distinction for the military sounds like drawing a line in the sand. From a constitutional perspective, maybe Congress can do this, because the Constitution gives it the express power to regulate the military (hence the doctrine of “deference to the military”). From a practical social perspective, however, having a law like this on the books can make gays and lesbians second class citizens (and we see similar debates with gay marriage).

One issue that has come up repeatedly as a teaser is the possibility of returning to the draft, or conscription, possibly to include women this time. Of course, this is partly motivated by the “back door draft” of the volunteer force and guard and reserve troops with repeated tours in Iraq. But the issue of social fairness, as we saw in the 1960s with student deferments from the draft during the Vietnam era, become compelling to many people, and affect how different populations of people are viewed. Politicians like Charles Rangel certainly know this and want to exploit it. Even Charles Moskos has argued that we should reinstate the draft as a model of social fairness and, at the same time (reversing some of his concerns over forced intimacy in the military) repeal the current form of "don't ask don't tell".

Of course, we all know that what is more likely would be a kind of enhanced national service, with some strong carrots (like paying college tuition) somewhat comparable to what the military can offer. But even in some of the other services, forced intimacy issues (like what worry the military) can come up, especially overseas when one works in cultures that may be hostile to people outside of the normal idea of family values. The concepts of “rebuttable presumption” and “propensity” are codified into the DADT law in such a way as to invite dangerous precedence for other areas.

The military ban, and the “don’t ask don’t tell” policy the way it has been implemented in practice, have a way of slanderizing GLBT people, especially men (the draft applied only to men and the Supreme Court has said that can be constitutional). Freedom should not be taken for granted, and the DADT policy, as understood today, implies that GLBT people cannot do their part in sharing the burdens of defending freedom. Therefore they would deserve to have fewer rights than others and be the first to be asked to sacrifice in other ways. Given the problems we face this kind of thinking has to be taken very seriously.

Will the policy be changed? Because of the performance of the Democrats in the debate, and even the lukewarm nature of the nod that most Republican candidates gave it, it sounds like there may be more political pressure (although not necessarily constitutional pressure, although there are a couple of cases in the pipeline) to change it than we had thought.

Because the policy (with its dangerous concept of presumption) is codified into United States Code, the policy would either have to be removed, or rewritten in such a way to allow a kind of non-public “telling” when not made in a manner to disrupt military discipline. This was be concept favored by the Rand Corporation in its 700 page report (calling for a “code of military professional conduct”) published late in 1993. It would certainly be tricky to reword the 1993 law in order to apply Rand’s recommendations, but that ought to be done. Doing so would restore some better faith in other Congressional efforts to protect the equal rights of gays, such as ENDA (the Employment Non-Discrimination Act, also proposed in 1993) for civilians. (And there certainly should be no federal constitutional amendment defining marriage for states.)

It's important to be able to step through all of the reasoning cogently. The Constitution gives Congress the explicit authority to regulate the Armed Forces, which so far (at the appellate level at least) has provided constitutionally acceptable rational basis for the discriminatory nature of DADT, and this authority includes the ability to conscript again, and maintain mandatory Selective Service registration (for males) now. The end result is that Congress can claim that some males, at least, are unfit to do their "duty" in participating in the defense of liberty and are potentially, in some cultural sense, undeserving parasites.

In my own case, because of my history of public association with the policy even though I served in the Army without incident (1968-1970) despite my civilian expulsion from William and Mary in 1961 for admitting to the Dean that I am gay – there have been some effects. During the 1990s, while working on my first book (partly about DADT) I was employed, though only as individual contributor (computer programmer) for a company that specialized in selling life insurance to military officers -- a situation that could call up certain moral or ethical questions about me and my entire background. I won’t give more details here yet. But I would say, I “retired” from information technology at the end of 2001, and if it weren’t for the DADT policy (and my public connection to it), I might well be a math teacher now. And we do need teachers.